In the same way I don’t appreciate anyone preaching to me about any subject – including politics (especially politics) – I refuse to shove my beliefs down anyone else’s throat. That’s why I decided to give this subject its own page. So for anyone who has a problem with what I believe, if you click on this tab, with the intention of saying something insulting or starting an argument, I will delete your comment. However, I am open to all civil discussions, whether we share the same beliefs or not.

In a nutshell, this is what I believe.
1. That Jesus is the Son of God, sent here to earth to live a sinless life.
2. That Jesus was beaten and crucified for our sins and sicknesses.
3. That He died, then rose again on the third day.
4. That He now sits at the right hand of God.
5. That He will return again and take all who have accepted Him as their Savior to heaven, where they will live for eternity.
6. That there is a hell, and those who have rejected Him will spend eternity there.
7. That, as a Christian, I will never be perfect. That I will screw up more times than I’ll ever be able to count between now and when I die – hopefully around 100 years old, painlessly, and in my sleep. Between now and then, I’ll probably annoy God on a regular basis. Trust me when I say, I’m really good at doing that. I struggle daily with language, though it’s much better than it’s been since a head injury from the accident I’ll tell you about in a minute. I also struggle – a lot – with irritation over rude drivers and fellow shoppers. So definitely as far from perfect as I can be.

Now, before I share some of the reasons why I believe all of this to be true, I want to say, please don’t be mad at me. This isn’t my game. I didn’t make the rules. I’ve just seen enough in my life to believe it. If you have too, it’s really quite simple to get saved.

If you want to assure your place in heaven, admit that you’re a sinner – because we all are, confess that Jesus is your Lord, and believe that God raised Him from the dead.

A lot of preachers/pastors/ministers leave it at that, but I’d add something else. Ask Him to help you guide you in your new life. And don’t forget to thank Him. Also, try to find a good, bible based church in your area. The Christian journey is much easier when you share it with like-minded people.

And it’s not going to be an easy journey. Sometimes, it’s going to be hard. Really hard. Some people say, ‘once saved, always saved.’ But salvation isn’t just a get out of hell free pass. God doesn’t expect perfection from us, but He does expect us to grow, and to ‘bear fruit’ (do our part to tell others about Jesus). That’s why it’s so important to fellowship with bible believing Christians to help, support, and encourage you in this new life.

Okay. So why do I believe all of this?

There have been at least half a dozen times in my life where I’ve come crazy close to dying. I won’t go in to all of them, but here are a couple that continue to prove – to me – that God is real and active in my life.

First, in 2008, I was in an auto accident that put me in physical, occupational, and vision therapy for almost a year. If I hadn’t looked over at my daughter at just the right moment, I’d have stepped on the gas pedal as soon as the light changed. And that two or three seconds meant the guy who blew through his red light would have hit my door instead of the fender. At fifty-five miles per hour, the odds are better than good I wouldn’t have survived.

And then there was what happened last year. If you’re new here and have a minute (or few), you can read about it by clicking here: The Unluckiest Girl On the Planet?

I’ll add a couple more things really quick. These are from a time when money was so tight I could make a penny not only cry, but beg for mercy. These were both during the same difficult summer. It might not seem like they would fall under the category of miracles, but to me they did.

For instance, when you’re that broke all the time, you look for free entertainment. This particular day, a local store was having some sort of celebration going on in their parking lot. It included a contest for best dressed pet. My daughter thought it would be fun to dress our twenty pound cat, Sam, in one of her old baby dresses and hat. So I said fine, not expecting to win. But there were only two other pets entered and we got third place.

The prize? A twenty dollar store gift certificate. Of course, we headed in to redeem it immediately. I was adding the total in my head, hoping it was accurate so we didn’t go over – because I didn’t have anything to add to it and it would have been embarrassing to have to put something back. I thought I stayed under, but the total was … exactly twenty dollars. The cashier was impressed, thinking I’d somehow managed to do it on purpose. Nope. It was as much of a surprise to me as it was to her.

That same summer, I really needed gas in my car – and there was no money for it. So, I prayed to find a twenty dollar bill just laying on a sidewalk somewhere. A day or so later, there it was – along with a five dollar bill. Laying on a sidewalk that I’d never, to the best of my knowledge, ever walked on before.

Some might wonder why didn’t God just keep me out of the dangerous situations? Or, why didn’t He just let me inherit a small fortune, or do some other miracle to deliver me from my financial problem?

While it might be nice to have my every wish granted, God is not – and should never be confused with – a genie in a bottle. He’s not here to give me whatever I want, or to bail me out of every difficult circumstance I find myself in.

He’s here to save me. To help me grow as a person, and as a Christian. I might not like every test I have to deal with, but what’s the alternative? Give up? Nope. Everyone, saved or not, is going to go through hard times. I’d rather have God on my side when I do than to try and go through them without Him.

Someone once told me something I’m going to share with you. It’s not a word-for-word quote, but I think it’s pretty close.

You can get saved, spend your life living as a Christian, then when you die and find you were right, you’ll spend eternity in heaven.

You can get saved, spend your life living as a Christian, then when you die and find you were wrong, you’ll just be dead.

Or … you can decide it’s all some convoluted fairytale, not get saved, live your life any way you please, and then when you die and find out you were wrong…

I’m not going to finish the thought. I do want to say that eternity is forever. I know a lot of people say they’ll be in good company if they wind up in hell. But if what I believe is true, it’s not going to be a grand reunion and eternal party. It’s just not. You can read a brief description of it (from the Amplified bible) by clicking here.

Again, I didn’t make the rules, I just believe them. And I don’t want to stand before God one day and try to explain why, when I had the chance to share Him with anyone who might find themselves on this page, I chose not to.

And now, a quick note to fellow believers-

Maybe fifteen years ago, I felt led (at least I think I was) to write a couple of plays. One for adults (Deceived), and one for teens (If We Cared Enough). Except for when I was a kid, I’m not someone who writes plays. But after letting them collect dust for more than a decade, I finally published them a couple of years ago. They’re only available in digital copies, but they’re free on Barnes & Noble, iTunes, Apple, and Smashwords (where you can download in pretty much any format there is). Unfortunately, it’s .99 cents on Amazon (Amazon is an affiliate link, learn more about those by clicking here). My goal has never been to make a profit from these plays – not even the .35 cents per sale Amazon would pay me. Therefore, for anyone interested, I would direct you to the other stores – unless/until Amazon price matches and makes them free. 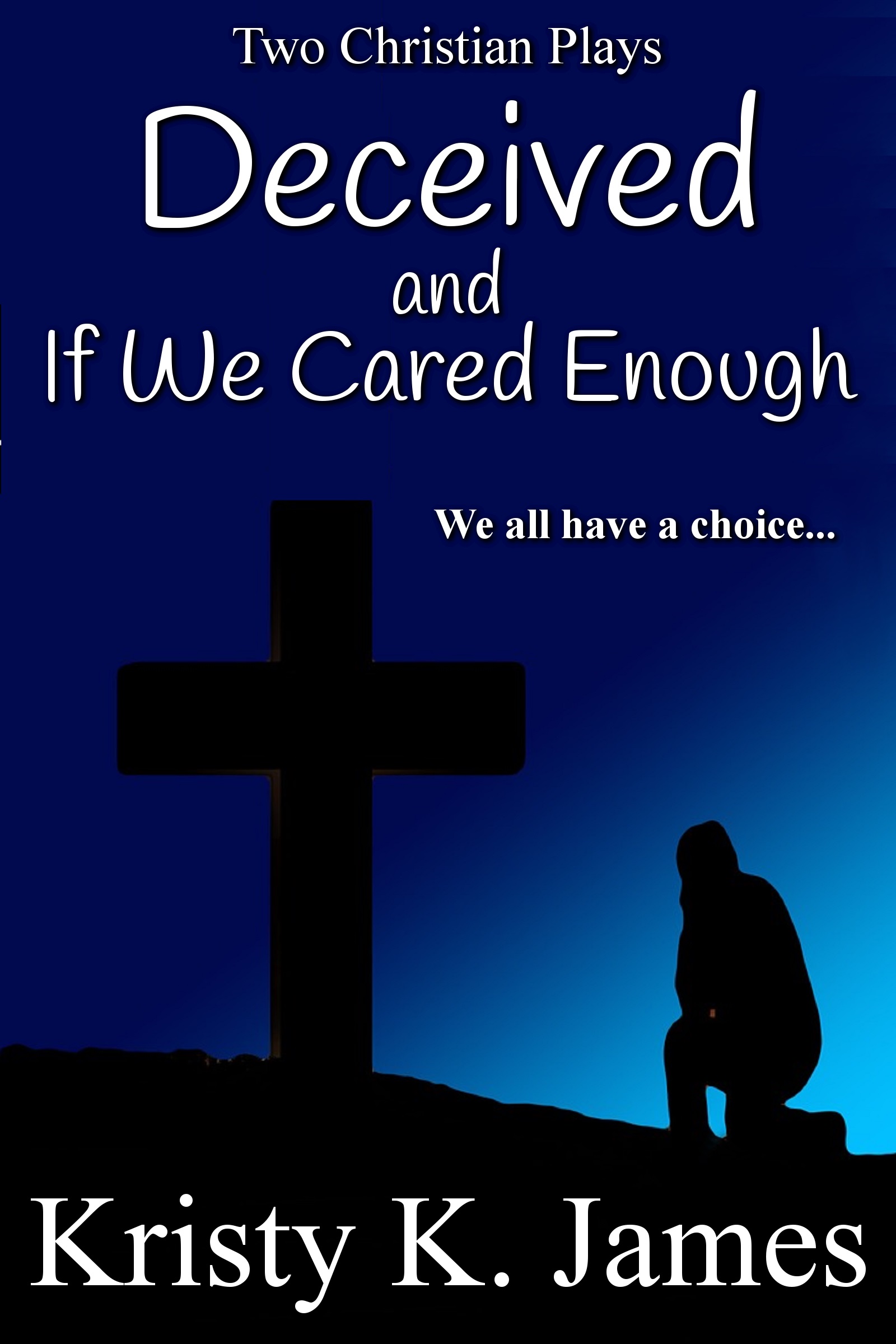 And now, if you’ve made it this far, I thought I’d share a few of my favorite songs. The first is probably the one I love the most and it makes me cry every time I listen to it.

The second one will bring me to tears every time too, but I pray it for everyone reading this (and for those who are not). The second half of it is my favorite part.

The last? Well, I’ve just loved since the first time I heard it.